Brainy Borough Brewing in the news!

Ever thought about opening your own brewery?

At Brainy Borough Brewing in Metuchen, which opened inside Hailey’s Harp-cade in November, anyone over 21-years-old can apply to get in on the action.

Those who are approved for membership can attend four annual tastings where they weigh in on what beers will be available to the public. Prospective members can apply at brainyboroughbrewing.com/membership-info/. There is a $150 yearly charge to be a member, which includes Brainy Borough garb such as t-shirts and growlers.

Currently, the brewery has six beers available on tap inside the Harp-cade, which is a family-friendly arcade with 30 rotating retro games that has been attached to Hailey’s Harp and Pub since 2016. Some of the Brainy Borough beers available inside the Harp-cade include the Highbrow, a classic amber ale, the Sophist, a coffee oatmeal stout and the Know Brainer, an American wheat.

Since there is no physical brewery onsite, Brewer Joe Nunziato works with Dark City Brewing in Asbury Park to create Brainy Borough beers after consulting with their 43 members. 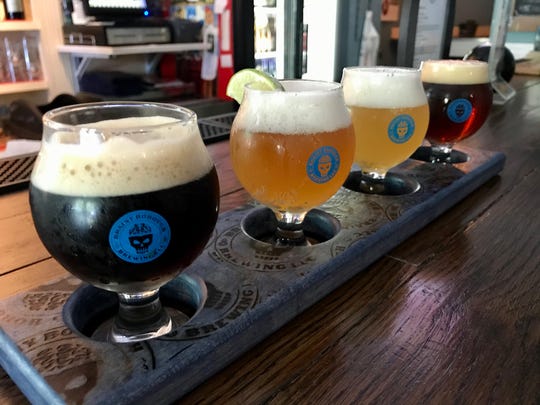 A flight at Brainy Borough Brewing. (Photo: Jenna Intersimone/Staff Photo)
Flynn said that the arcade, which features games such as Pacman, skee ball, shuffle ball and Defender, has seen sales go up about 20-30 percent since the brewery opened. The arcade still offers a full-service bar as it did previously.

Brainy Borough CEO Joe Cascio, who has lived in Metuchen for 22 years, started toying with the idea of opening a brewery after befriending Nunziato, who was a homebrewer, and consulting with beer festival contacts he had made through his previous position as New Jersey Convention and Exposition Center general manager. Cascio then expressed his interest to Flynn of opening the brewery inside the arcade, a move which would limit startup costs.

“Some local friends and I realized that we had this small town without a brewery and it seemed like every other town had one, so I thought there was a need,” he said. Cascio hopes to open a dedicated brewing space for Brainy Borough Brewing in Metuchen in 2-3 years. 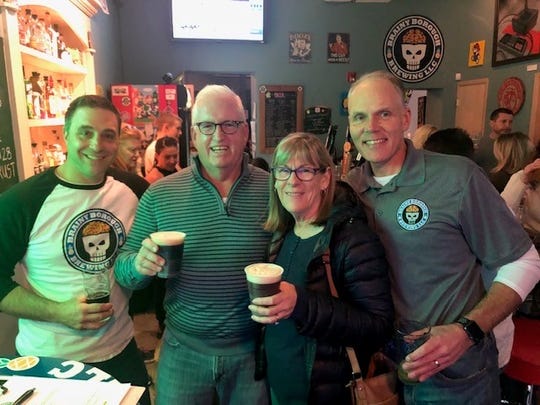 “People love the fact that this is something new and cool in their community where they can be active participants in what’s being created,” he said.

Where: Inside Hailey’s Harp-cade at 15 Station Pl., Metuchen

Oktoberfest: Hailey’s Harp and Pub will host an Oktoberfest on Saturday, Oct. 5 from 12-5 p.m. in which Brainy Borough Brewing beers will be some of the featured options.

Jenna Intersimone has been covering food, drink and fun in the Garden State for the USA Today Network New Jersey since 2014, after becoming a blogger-turned-reporter following the creation of her award-winning travel blog. Born and raised throughout every corner of NJ, she’s a tried-and-true Jersey girl. Contact her at Jintersimone@Gannett.com or follow her @JIntersimone.